Safety first, I set up the area where the ladder was to go on Thursday evening. The main component of this was piece wood screwed into the pathway for the foot of the ladder to butt against.

I put the dish up on Friday evening, since the weather was nice. 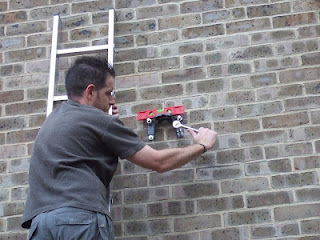 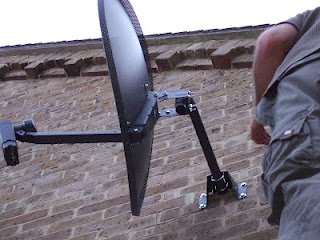 Saturday defied the weather forecast and I was able to wire up the dish. Alignment was remarkably swift and simple. As mentioned in my previous posts here and here, I’d read and re-read relevant sections of Martin Pickering e-book on numerous rainy evenings as well as this post on The Perfect Satellite Dish Alignment - a How To Guide, but I was still surprised. Having used Dish Pointer to find my Azimuth and Elevation, I pointed the dish in roughly the right direction. I could hear the Olympics blaring from the tv attached to the old digibox, so I knew I’d locked on to the right satellite straight away. Then it was just a couple of horizontal adjustments to get the strongest tone on the satellite finder. I did a sanity check on the vertical and got a bit of an improvement there and finished off with the skew adjustment. I don’t think it could have taken much more than five minutes in total. 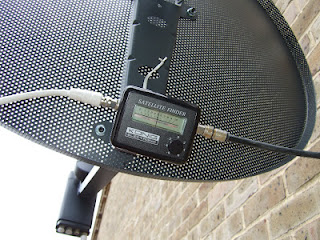 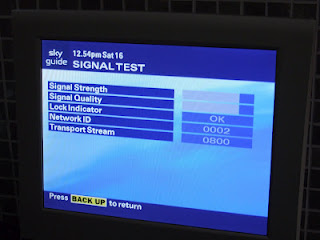 After that it was just a case of tidying up. Fitting the f-plugs on the dual shot gun cable and sealing the hole into the loft space.

Part of the installation aim was to replace a failing freeview box in the kitchen, so I browsed around for a SD freesat tuner to fill it’s space. I chose the bush, mainly as it was the cheapest and I could pick one up locally.

I came across Join Freesat web site in the course of all this, which was a quite interesting resource.

Bought, plugged in and tuned without any issues. WAF achieved so far at least; she felt the receiver looked better than the previous box and the picture seemed better too.