I’ve read numerous posts and articles on Vista and the majority of this seem to summarise that there is no compelling reason to upgrade from XP.

Since I first tried it out, I have been a fan of XP Media Center Edition 2005. Despite it’s quirks, it delivers a simple and usable media interface to the living room. I don’t think I would care to go back to normal just TV and having looked at offerings such as Sky+ and Virgin Media Television, I still feel there are things I would rather not compromise. Vista Media Center too, seemed to offer little incentive and too many headache tales of incompatibility and woe.

Yet upgrade I have!

It went really smoothly too. I didn’t even have to take the disks distributed with the motherboard or graphics card out of their sleeves. I installed the TV tuner card drivers and the few bits of software I have on my media center and the job seems done.

I almost think I’ve missed something! 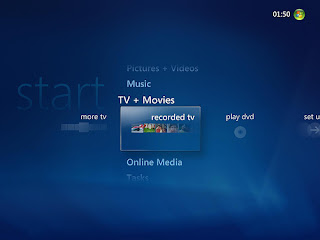 Vista itself seems OK, different enough to be disconcerting but nothing major.

The differences in VMC though, I’m not too sure…

there is too much on the first screen

too many menu options, for things I wouldn’t want to use, hanging around

navigation is horizontal and vertical

pictures are bundled in with video

I don’t know if my wife is going to like it!

But it’s late and it it’s done. I’ll live with it over the weekend and see where we are then.

The screen shot is not my own, its from flickr, because I’m tired and I really can’t be bothered to duplicate the effort.