Yesterday was a beautiful day on the south cost and I got stuck in one of the best traffic jams ever. Much preferred to the usual morning congestion I hit this morning.

After taking my son to see Speed Racer (the visual equivalent of a massive sugar rush for a six year old boy), we looked round a collection of minis displayed around Gun Wharf Quays in Portsmouth. These were here by arrangement of the Italian Job, a charitable organisation run by mini enthusiasts who run a fund raising tour inspired by the the Italian Job film for the children’s charity KidsOut.

The culmination of yesterdays showcase was to be a “Moving Mile” of minis at Southsea Common. Despite only becoming aware of this at the eleventh hour, my mini was freshly polished and eager to be part of it. 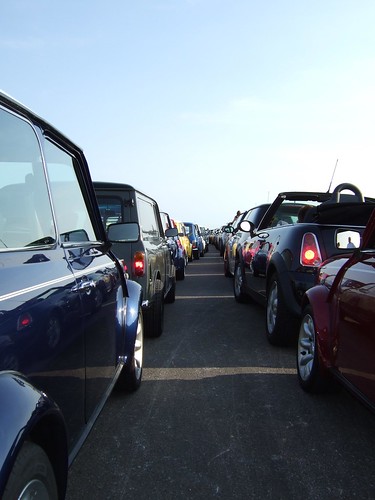 As a result we found ourselves among another 150 or so minis of various ages and design. Even though there were only half the amount needed to break any records, it was really good fun and quite a spectacle.