I received my copy of Go Away White, the new album from Bauhaus yesterday and I have to admit that I was a little nervous about playing it. This feeling of trepidation wasn’t helped by the sticker on the front proclaiming this to be their first studio recording since 1983; though this is a little misleading, since they recorded a new track Severance for their live reunion album Gotham back in 1998. 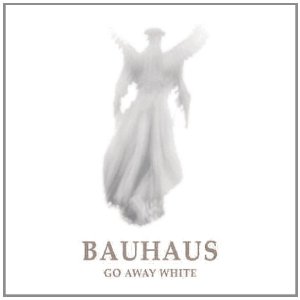 Bauhaus are still a band I listen to frequently. There may be an element of nostalgia here, but I do feel that for me at least, their music has not dated in the way so much of what I listened to in my youth has.

I was nearly sick with worry when they reformed for a tour in 1998.

The closest analogy I can think of would be The Matrix, a fantastic film irrevocably tarnished by its sequels (well the second one anyway – I didn’t even bother with the third after that).

I shouldn’t have worried though. It was perhaps the best concert I have ever been to and I would have defied anyone who even suggested that it was not in fact fifteen years earlier.

But what about Go Away White? Well, it’s not the best album I have ever heard, but equally, I should not have worried so much.

From the outset the sound and the familiar form was present and by about half way through I realised that I had stopped worrying whether next track may spoil it. I was enjoying it.

In they days when I would look at my record collection and think, “I fancy a bit of Bauhaus, which album should I put on”, Go Away White might not be my first choice. But now, with my MP3 player more often than not on shuffle, it will fall comfortably into the collection to be genuinely enjoyed when a track crops up.